What is the OSM?

The Grand Conclave of the Order of the Secret Monitor

or Brotherhood of David and Jonathan

The Order of the Secret Monitor which developed from a still more ancient degree is the Brotherhood of David and Jonathan and is in its way older than Freemasonry itself. Its principles and its watchwords being founded upon those grand examples set by two worthy Hebrew Princes around 1000BC as recorded in the Jewish history of the Bible.
This is a Society framed upon the principles of self-sacrifice; of mutual trust, watchful brotherly care; of warning in time of danger; solace in time of sorrow; and skilful and effective friendly advice in every circumstance of life: A Society that meets a great and crying need in human affairs and is calculated to benefit those who act up to its tenets.
If a Brother be in sorrow the Conclave will afford him sympathy; if in danger his Brethren will give him consolation; if in distress the Visiting Deacons will bring him consolation; if in poverty he will find aid.
At every turn in life, at every crisis of fate he may look, and not look in vain to the experienced among the Brethren who have pledged themselves to give him caution, to prompt him to good actions, to warn him of doubtful ones – Generally to watch over him, support him and cherish him so long as he may need their care and prove himself worthy of the confidence reposed in him.
Within Craft Freemasonry we are taught, at an early stage, that it has for its Principles, ‘Brotherly Love, Relief and Truth’. In no other Order in Freemasonry, than that of The Order of the Secret Monitor, can there be found a greater emphasis on those funda- mental Masonic Virtues, for the teaching of those Principles are a dominant part of our Ceremonial and Ritual, and enables us to put them into practice. 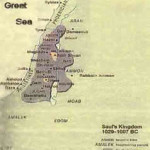 This Order in Freemasonry is based on the friendship of David and Jonathan. The land of Canaan , or Israel , as it is known today, is a tract of hill country with a narrow coastal belt on the Eastern Mediterranean . When the Children of Israel returned to Canaan from Egypt (circa 1320 BC) they found the country parcelled-out into petty kingdoms, whose people regarded the Israelites as interlopers. There was perpetual warfare between rival tribes for over 200 years but the Israelites, who were ruled by Judges, ultimately had possession of a block of territory from Dan to Beersheba. 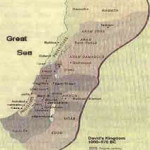 From this period on, we have the kingdom of Saul, and then ultimately David; the son of Jesse the Bethlehemite. David distinguished himself not only as a warrior but as a musician. His encounter with Goliath is known to all of us. His success, however, made Saul jealous, and with the help of Jonathan, David was saved from the treachery of Saul. The shooting of arrows is part of this story, as well as the various refuges occupied by David. Jonathan visited David in these refuges and renewed the covenant between them. Jonathan was killed in a disastrous battle against the Philistines near Mount Gilboa (1018 BC). Saul committed suicide, and David was finally accepted as king by the people of Judah.

Origins of the Order

Based on this Biblical history, the Order has been developed. We should be aware that speculative masonry in the 17th and 18th centuries gave rise to the invention of many post-Craft degrees. Particularly in Scotland were those degrees prevalent and the Early Grand Scottish Rite at this time collected degrees from the 4th to the 44th. The 16th degree was the ‘Order of Brotherly Love’, and in the late 17th century, this Order was taken from Scotland to New York , where various interpretations were given to both the French and Dutch Freemasons over the next hundred years or so. The rite worked in the 19th century could be called ‘The Secret Monitor or Trading Degree’. Around 1890 the Sovereign College of Allied and Christian Degrees for America took the Order under its aegis and candidates had to be Ark Mariners of good standing.
This now brings us to the History of the Order in Great Britain. After serving on the Federal side as a surgeon in the American Civil War, an Englishman, Issachar Zacharie, settled in California and took a prominent role in Masonic affairs. He returned to London in 1875 and set up practice in Brook Street, Mayfair . He made many Masonic contacts, and was advanced in the Bon Accord Mark Lodge in 1882. Here he met other Brethren who had received the Degree of Secret Monitor in various places. Amongst these was one C F Matier who had received the signs etc. from an American brother in 1865. At this period the communication of the signs etc. seems to have been a simple and personal ceremony. Brother Zacharie discussed with these brethren the possibility of working the degree in England, as a result of which a Conclave of the Order was formed in May 1887 which ultimately became Premier Conclave No 1. 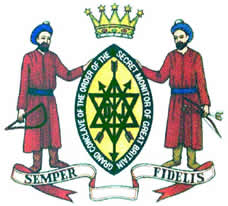 Over the past 65 years the Order has flourished in England , Wales and Scotland , and altogether there are now over 500 Conclaves in the English Constitution which includes many in India and South Africa , several in Europe and around the globe. France and Australia were formerly part of the English Constitution but were granted independence.
The English constitution of the Order has its central administration in Mark Masons’ Hall, St James, London . With the U.K. being divided into Provinces and the rest of the world into Districts, each is ruled over by a Provincial or District Grand Supreme Ruler. 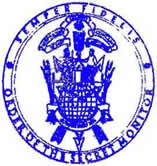 Entry to the Order

For Induction, candidates need only be Master Masons in good standing.
There are Three Degrees, including the Chair. Regalia for the first two degrees is a breast jewel and upon Installation, having received a delightful and personal commissioning ceremony, the Supreme Ruler is invested with a sash, collaret and robe.
Provincial and Grand rank bring with them distinctive sashes of blue and crimson respectively, each accompanied by a collaret and jewel.
Interested ?
Brethren interested in finding out more should, in the first instance, contact the Provincial Grand Recorder: Wy. Bro. Alan Harrison via e-mail alan.harrison717(at)gmail.com, who will be pleased to provide information on Conclaves in the Province; meeting places; and names and addresses of Conclave Secretaries.